Construction of Phase Four of the Mohammed bin Rashid Al Maktoum Solar Park is progressing at pace and stands at over 30% complete. Once ready, the fourth phase will generate 950 megawatts (MW) at an investment of $4.29bn. The project will include the construction of the world’s tallest 260-metre solar tower and the world’s largest global thermal storage capacity of 15 hours; allowing for energy availability round the clock. 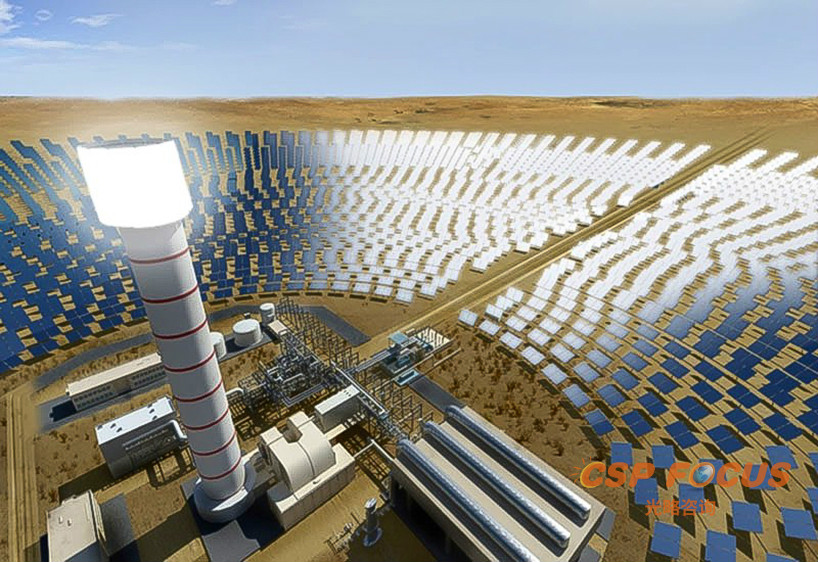 Llo, Friday September 20, 2019 - Located in Llo in Cerdagne (Eastern Pyrenees), it is the first thermodynamic Fresnel solar energy concentrator with energy storage in the world. With a power output of 9 MWe and thermal energy storage, i.e. the electricity consumption of more than 6,000 homes, the Llo power plant produces electricity both during the day and part of the night.

The established project will grant the current mode of photovoltaic power generation that is being promoted in Jujuy, a complementary solar thermal system that will allow to produce energy during the 24 hours and provide greater stability to the transmission of the generated electric energy.

Shanghai Electric Group has awarded Nervión Industries, a subsidiary of the Amper Group, the construction of salt storage tanks for a solar thermal power plant in Dubai for 13 million dollars (about 11.77 million euros).

Australian concentrated solar power (CSP) company Vast Solar has finalised a capital hike to progress development of its hybrid project that comprises a 30-MW CSP facility with 10 hours of storage and a 20-MW photovoltaic (PV) plant.

A greenfield concentrated solar power (CSP) project with innovative parabolic trough technology and a molten storage system has revitalized a remote region. But the project is also laudable for its social, economic, and environmental commitment to the unique region.

CSP Focus predicts that the total capacity of newly-built CSP projects in China this year will be record high. Six commercial projects with total capacity of 350MW will be completed and connected to the grid by the end of 2019. As a matter of fact, Luneng Haixi and Power China Gonghe projects made it just this month.

Morocco has plans to build a fourth section on the Noor Ouarzazate complex and a second 800 megawatt CSP tower near Midelt, 200 kilometers south of Fez.

The project aims to test and demonstrate Azelio’s Stirling engine systems and integrated thermal energy storage (TES) solution for renewable energy projects that use photovoltaic solar, concentrated solar power (CSP) and wind energy, or projects that provide off-grid solutions, with the purpose of determining if the technology can be included in current and future renewable energy projects.

Concentrated solar power accounted for 3.5% of electricity in August in Spain

Concentrated Solar Power marks a historical record of generation with 4,269 GWh until September 2019 in Spain

This generation volume is 4.1% higher than the previous record of 2015 (4,102 GWh) and represents 2.67% of the total electricity generated in Spain in the first eight months of the year. In August, the solar thermal input reached about 9% of the generation in a timely manner, with a 2% contribution in the night hours.

The Swedish energy storage company SaltX Technology built and deployed a first-of-its-kind energy storage in 2019. The pilot plant, which is based on a nanocoated salt material, confirms a good material performance and a scalable energy storage concept. Furthermore, the large-scale tests showed a promising roundtrip efficiency.