Located 5km from Yumen City in Gansu province, Yumen Xinneng is the only project in China’s 1.35 GW CSP Commercial Demonstration Pilot program to use beam-down technology. China awarded 20 projects in the program at a feed-in tariff price of RMB 1.15/kWh ($170/MWh). 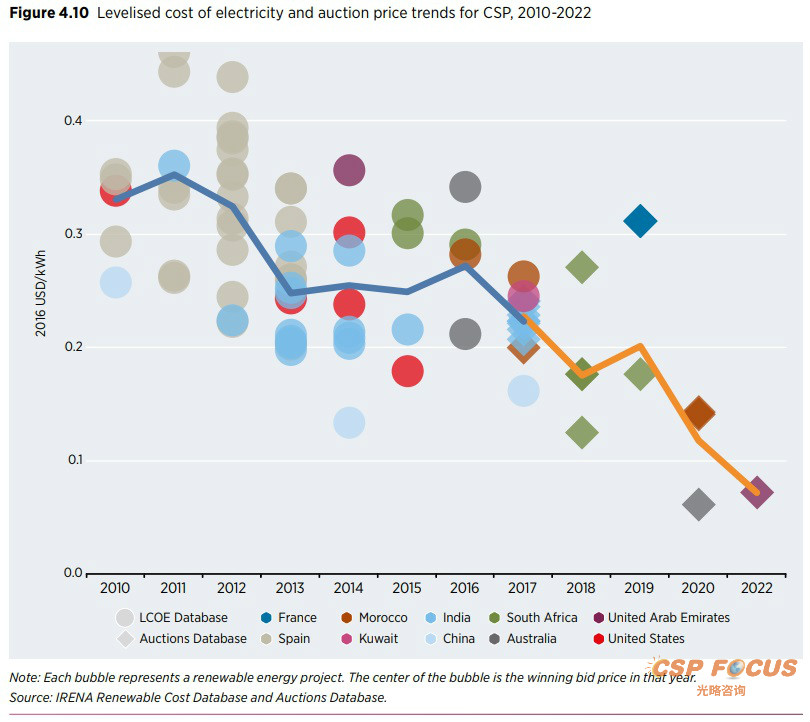 The BCP design replaces the elevated receiver used in conventional CSP tower plants with a secondary ‘hyperboloidal’ reflector, which bounces solar energy from heliostats to a ground-based receiver.

The Yumen Xinneng plant follows a 300 kW pilot plant built by BCP in 2015 with co-developer Shanghai Parasol. Despite limited deployment, the installed unit cost of the Yumen Xinneng plant is below RMB 7/kWh/year, competitive against other conventional plants in the pilot demonstration round, Chen said.

“The CAPEX of the receiver system is lower than in conventional systems, but the numbers required, and unit price of the beam-down tower offset this,” he said.

BCP predicts modular scaling gains and new design features will slice the cost for larger projects. The group is currently developing a second-generation module which will increase the rated thermal power four-fold, providing 200 MW of capacity from 14 modules, Chen said

“At this scale the cost will decrease by 30% compared to levels at Yumen Xinneng,” he said.

The design uses a 3D volumetric receiver, rather than the tubular receiver used on conventional towers, which minimizes optical and thermal losses and offers high-temperature capabilities.

“The thermal efficiency of the volumetric receiver can reach 90.5% at nominal load, and 88% annual average efficiency, compared to less than 60% levels for conventional external receivers at full load,” Chen said.

In July, the first module at the Yumen Xinneng plant heated the molten salt heat transfer medium to 570 degrees C. This compares to an average temperature of around 485° C for today’s operational tower plants, according to data from the CSP Global Tracker.

A number of research groups are raising the temperature limits of CSP plants to increase system efficiency.

A U.S. research team is currently developing a 3D volumetric receiver that operates at over 720°C and has a thermal efficiency rate above 92%.

The team, led by Sameer Rao, an Assistant Professor in Mechanical Engineering at the University of Utah, was recently awarded funding from the Department of Energy to validate the design and experiment at lab-scale.

Other groups are testing alternative heat transfer mediums in new high-temperature designs. In one example, the German Aerospace Centre (DLR) is developing a centrifugal CSP receiver which has already achieved particle temperatures of 965°C at the receiver outlet.

The receiver cover can be closed quickly during cloud cover to maintain the heat of the molten salt, enabling the receiver to restart within a few minutes of skies clearing, Chen said.

This makes the design particular suitable for areas subject to frequent cloud cover, such as the north-west of China, he said.

Minimizing the cost of more specialized components, such as the special hyperboloidal reflectors used in the receiver chain, could prove more of a challenge. Critics of beam-down designs have questioned the cost of manufacturing these items.

Modular designs also allow synchronized construction and faster returns on investments, as the first modules can be brought online to generate revenues while others are built. BCP estimates a 24-month construction period for a 200 MW plant.

China Sinogy won the EPC contract for Yumen Xinneng based on a construction duration of 19 months, which proved too ambitious for the first commercial-scale project. The project is now 29 months into construction, but it is advancing quicker than many other projects in China’s pilot program.

To-date, only two CSP tower projects under the program have been connected to the grid. The 50 MW Supcon Delingha plant was built in 26 months and the 100 MW Shouhang Dunhuang plant was completed in 37 months, data from the CSP Global Tracker shows.

Smaller towers are subject to less environmental permitting restrictions and can be more protected from wind and sand erosion or heat loss during colder months.

Modular plants can also offer greater revenue reliability, as faults in individual modules can be repaired while other units remain operational.

The BCP design could also be adapted to create much larger plants that could serve multiple power and heat applications, Chen said.