Solar thermal or Concentrated Solar Power (CSP) is not just one more renewable. Its great asset is that it allows availability and dispatchability (ability to generate electricity depending on the need of the network) thanks to its thermal storage and therefore it is possible that it manages production on demand, even more if it is done under the criteria of decarbonization.

But it does not finish taking off internationally not only because of its costs, still very limited in relation to other renewable technologies, but because it needs a series of very specific geographical, physical and atmospheric conditions, as discussed at the CSP Madrid 2019 Congress, The international reference meeting of the Concentrating Solar Power industry.

“Even so, solar thermal is the cheapest when the sun goes down,” explains Luis Crespo, general secretary of Protermosolar and president of the European Association of the Solar Thermal Electricity Industry (ESTELA), “for example, the peak of maximum demand in the Spanish peninsula usually occurs around 8:00 p.m. on the cold days of the winter months, when there is hardly any photovoltaic or wind power contribution, and there is the storage system of the Concentrated Solar Power could cover that need and even participate in the arbitration of spot market prices as do the pumping plants”. 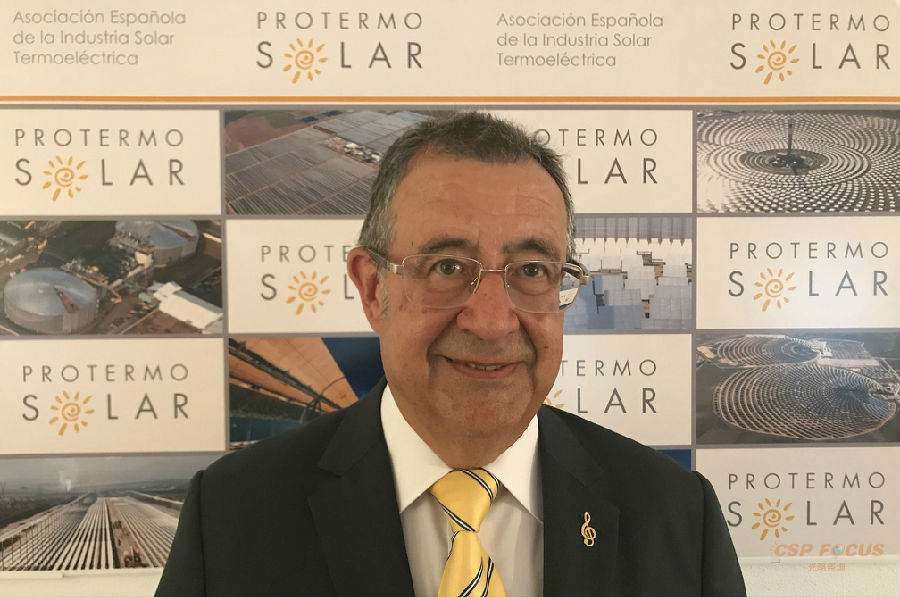 The six-hour reserve of the storage tanks of these Concentrated Solar Power plants could contribute for two or three consecutive days to respond to the high demand for those maximum peaks, and the total backup capacity will be recovered on a sunny day or in the next valley period. “If this potential is recognized, the storage tanks could be oversized with little additional investment and the electricity supplier at peak times for a full week could easily be done.”

Hence, they are new auctions that may need the update of new solar thermal power in the market. “We do not expect the Government to have designed specific auctions for solar thermal power, but rather that other additional price requirements, such as employment management or job creation for each of the projects that concur, are specified in renewable energy auctions."

“It is true that in Spain the price is expected to remain between 80 and 100 dollars / MWh (72 and 90 euros / MWh at the current exchange rate), but we are not so far from competing with the cycles, which are subsidized and their price It is around 60 dollars", Crespo points out, “and in some countries with the DNI (Chile) as Chile, it is expected that by 2020 prices below 50 dollars / MWh (45 euros / MWh) can be reached".

It is precisely the Atacama Desert, the geographical area with the perfect weather conditions, “which will make the price very competitive," confirmed panelists, president of the China Supcon Solar, “and I bet it will go down from 50 dollars / MWh ".

In Europe, solar thermal is only feasible at latitudes below the imaginary line of Madrid and Spain remains the world leader in installed power (2.3 GW), followed closely by the US. (1.8 GW) despite the slowdown of Trump’s policies, and of China.

The Asian country had proposed in 2016 to build 20 Concentrating Solar Power plants that added a total of 1.5 GW, but finally 13 (1 GW) will be built due to financing and regulation problems in the Asian giant. “The Chinese industry, although it has hired European specialists, many of them from Abengoa, to carry out these projects, the truth is that it has yet to prove that they control a technology that is difficult to export as is the case with photovoltaic panels, and which Spain is still the leader".

So Spain would be a leader not only in knowledge but also in installed power if the objectives of the National Energy and Climate Plan (PNIEC) are carried out with the modification of 5 new GW of Concentrated Solar Power until 2030.

“It is not only to incorporate more renewable capacity into the system, it is to offer a strategic energy storage reserve, that is, it does not work in the same way as the pumping plants and as it is expected that the batteries worked in the future, charging during the night and supplying when the price of electricity is high", Crespo concludes, “the 20 Concentrated Solar Power plants proposed by Protermosolar in its report “Transition Report” could provide through storage a quantity of annual energy similar to approximately 20 pumping stations such as La Muela".

“Concentrated Solar Power technology could improve load peaks by combining photovoltaic with wind energy and energy storage, and will improve the new generation so in ten years the cost of this technology could be half of what it is now, it is the projection that we handle". Fernando Gonzalez, CEO Cerro Dominador, Jose Lobo, Consultant and Former VP BD LatAm Solar Reserve and Xavier Lara, Renewable Energy Senior Consultant made the price estimation in the panel "CSP opportunities in Chile and LATAM".