“We’re very confident of achieving financial closure on target for the Dubai plant in the first quarter; the minute the financing closes, and it goes into construction, people realise it’s real and it creates yet another buzz around it,” Paddy Padmanathan said in an interview in Abu Dhabi.

In September, ACWA Power, in consortium with China’s Shanghai Power, was selected by the Dubai Electricity and Water Authority (DEWA) to build a 700 megawatt (MW) extension to the Mohammed bin Rashid Al Maktoum Solar Complex in Dubai, after submitting one of the lowest tariffs for a CSP project at 7.3 US cents per kilowatt-hour. The project is valued at Dh14.2 billion. 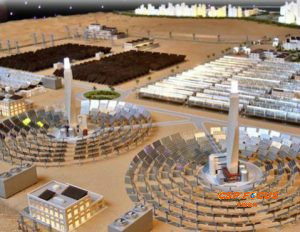 Mr Padmanathan says the company plans to gradually expand its international business into new geographies, lessening its reliance on the Saudi market.

The company is a key participant in Saudi Arabia’s plans to increase the scope of renewable energy, namely wind and solar, to generate up to 9,500MW of electricity in the kingdom by 2030. The developer wants to bid for the kingdom’s first renewable power projects, namely a 300MW solar power plant and a 400MW wind project.

As part of its capex spend, ACWA Power is set to invest around US$4bn on renewable energy projects in Dubai, Jordan, Egypt and Morocco next year, with 80 percent of the cost to come from debt and the rest from equity.

ACWA Power announced on Monday it had been awarded a build-own-operate contract for the development of the Salalah Independent Water Project by the Oman Power and Water Procurement Company, as part of a consortium with Veolia and Didic.

Mr Padmanathan confirmed the company’s intention to list in Saudi Arabia and an international exchange in the coming year.

“We’ll be looking at filing in 2018 and beyond that it’s up to the regulators, but our expectation is to move on now,” he said.

“Everybody talks about listing. You need to be responsible. You need to make sure you have stable dividends coming through and we’re now as a company at a stage where we’ve got adequate enough operating portfolio that can generate that dividend stream and we’re now ready to bring the public in to become shareholders, and 2018 is our target.”

The Riyadh-headquartered firm is owned by a group of private Saudi holding companies as well as the Sanabil Direct Investment Company, which is in turn held by the state-owned Public Investment Fund.