Why is nobody talking about concentrated solar power? 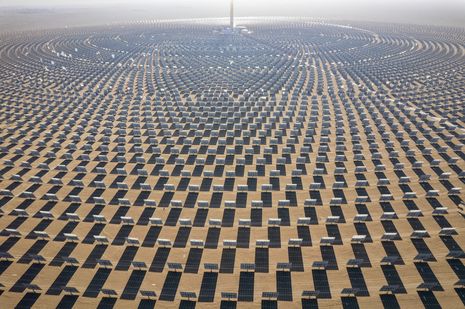 When most of us think about solar power, we picture large black panels made of silicon, unattractively stuck on top of houses. These photovoltaic (PV) solar cells are set to play a key role in the global push to “Net Zero”, and you could be forgiven for thinking that, alongside some wind farms here and there, with enough of them scattered around the planet our energy needs would be met. Unfortunately, these traditional renewables suffer from intermittency – meaning they can’t generate electricity when the sun isn’t shining, or the wind isn’t blowing. Concentrated solar power (CSP) is a technology offering a solution to this problem, so why is hardly anyone talking about it?

The idea for CSP is nothing new: in fact, the first plant was built way back in the 1960s by a research team based in Italy, with designs becoming more advanced over the years. Now, systems can concentrate the sun’s energy with such efficiency that temperatures over 1000 °C can be reached – hot enough to melt salt, or even rock, and use this as the heat transfer fluid.

This is the key to why CSP has so much potential, because thermal energy (in the form of molten salt or rock) is much easier to store than electrical energy, which requires very inefficient and expensive batteries. With proper containment and insulation, hot liquid can be stored for up to 10 hours, and as a result the plant can continue to generate electricity throughout the night. The hope is that within just a few years this storage period could be extended up to a week, meaning even a few cloudy days would not be enough to stifle the energy supply. The storage capacity also gives grid providers the ability to ramp up electricity production during periods of higher demand. Power supplies which can do this are known as “dispatchable” and are crucial for maintaining the flexible energy systems we have come to expect as consumers.

“If CSP is such a revolutionary technology, then why aren’t governments investing in it?”

Despite their storage abilities, CSP plants do still require direct irradiation and therefore an average daily minimum of sunshine to produce electricity. This places a limit on where a feasible location for such a plant might be and means we shouldn’t be expecting to see CSP power stations cropping up in mostly rainy and cloudy areas with short daylight hours. Still, there are plenty of locations that are perfectly suitable for the deployment of CSP. As of September 2021, Spain is leading the way with a capacity of 2.3 GW, closely followed by the USA which has a total capacity of 1.7 GW. Other major players in the global market include China, South Africa, Morocco and the United Arab Emirates, and it is in these countries where most growth is expected before 2030, according to the International Energy Agency (IEA).

While the prospect of increased CSP capacity in these countries is a good thing, any planned developments fall far short of what is required to make a significant dent in the energy sector. In fact, the growth in capacity from CSP predicted by the IEA represents just 3% of what is required to reach a “Net Zero by 2050” scenario. So, what’s going wrong? If CSP is such a revolutionary technology, then why aren’t governments and energy companies investing in it?

The answer, of course, lies primarily with the cost. Due to the large scale and complexity of these projects, upfront capital costs run far above the cost of installing PV solar panels and so investors tend to steer clear of CSP altogether. But this comparison between CSP and PV is outdated and fundamentally flawed. Policymakers shouldn’t be pitting the two technologies against each other just because they both have the word “solar” in the name; CSP is a thermal energy source and as such is more comparable to gas or coal. And while it’s true that both gas and coal power remain cheaper than CSP, these potent carbon emitters certainly have no place in a Net Zero future – whereas CSP does.

As more CSP plants begin to crop up, and the industry develops, costs will inevitably fall. But even then, the global community must first begin to see that, as with all renewables, it’s not an either/or scenario with solar power, and that these technologies work best when deployed together. If this is achieved, then CSP could certainly be a major dispatchable energy source in the years to come. With COP27 now only five months away, it’s time to put CSP at the top of the agenda if we want to see this happen.