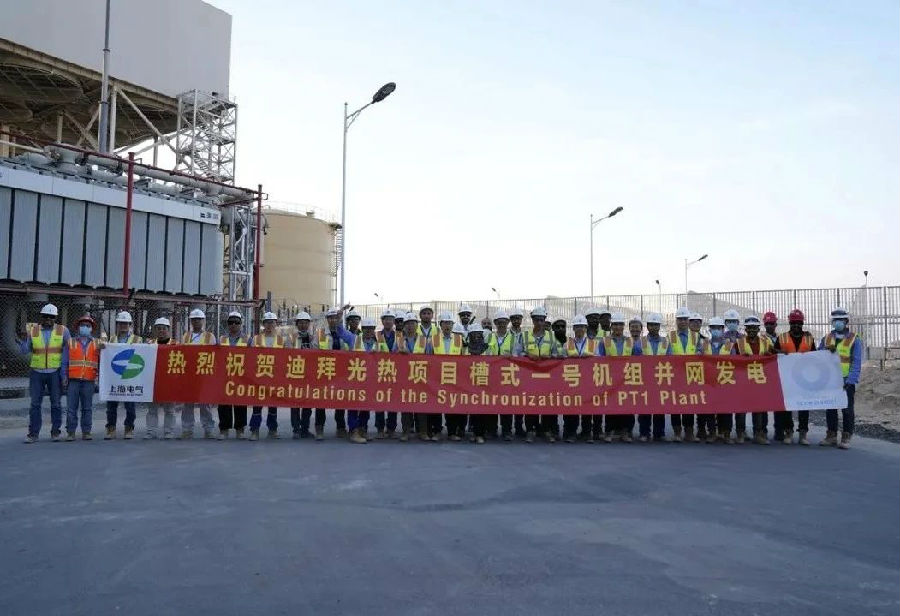 On November 29 (Dubai Time), the Trough Unit No. 1 facility of Shanghai Electric’s 700MW solar thermal and 250MW photovoltaic solar power plant in Dubai has successfully achieved grid-connected electricity generation, marking a significant milestone along the path of the firm’s entry into the renewable energy sector. The facility is already delivering top-notch technical parameters and reliable operation of both the primary and auxiliary equipment, supplying environmentally friendly solar thermal energy to local communities for the first time.

The project, for which Shanghai Electric Group is the contractor, is the fourth phase of the solar thermal and PV power plant developed by Dubai Electricity and Water Authority in Mohammed bin Rashid Al Maktoum (MBR) Solar Park. Connection of the facility to the grid marks the completion of a key goal in Shanghai Electric’s globalization roadmap. Built on the world-leading tower and leveraging trough solar thermal power generation technologies, the project overcomes the limitation that conventional PV power stations cannot generate electricity at night, making it a demonstration model for the Chinese government’s Belt and Road initiative and efforts to achieve global carbon neutrality.

The 250MW PV modules are dispersed in unused locations to maximize site use, while the 700MW solar thermal facility consists of three 200MW trough units and a 100MW tower unit. It is the largest standalone solar PV project in the world, with an area of 44 square kilometers (approx. 17 sq. miles), the equivalent of just over 6,000 standard soccer fields or 100 Tiananmen Squares. The project utilizes roughly 560,000 tons of molten salt and 70,000 heliostats each measuring roughly 25 square meters. The earthwork required for site leveling in the desert amounted to some 40 million cubic meters, which is equal in volume to 41 ‘Water Cubes’ (the well-known aquatics center at the Olympic Green in Beijing) or to the amount of sand and gravel used to construct two of the artificial islands supporting the Hong Kong-Zhuhai-Macau Bridge. The facility, which rises to a height of 262 meters (approx. 860 feet), is the tallest tower solar thermal project in the world. Additionally, it provides the world’s biggest commercially operating slot opening technology with an opening distance of 8.2 meters. Operation of the facility replaces the burning of 2 million tons of standard coal annually. All of these factors combine to make it the largest solar thermal project in the world in terms of installed capacity, investment size, and molten salt reserve heat. 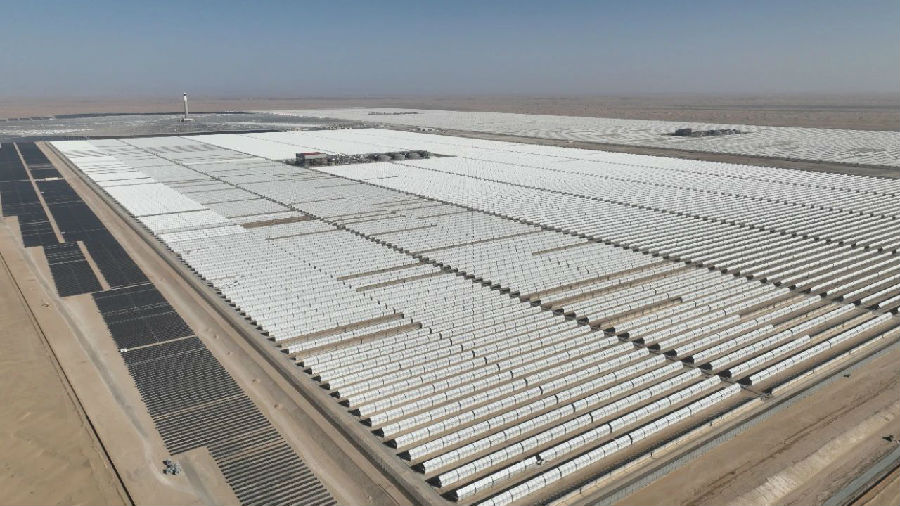 Its location in the middle of the desert, where daytime temperatures can soar to close to 50°C (122°F), combined with the impact of the pandemic, among other factors, led to the project encountering several difficulties during construction, including rising costs across-the-board (of which costs for raw materials witnessed the steepest increases), delays in shipping, supply chain challenges to the fabrication of equipment and a severe staffing shortage. By adopting creative solutions and being meticulous in advance preparation, the project department overcame several technical issues to achieve this milestone.

The energy stored in the trough units and the tower unit, once all units are operational, can generate power continuously for a maximum of 13.5 hours at night and 15 hours during periods of inclement weather. When the entire project is completed, it will bring Dubai significantly closer to achieving its 2050 Clean Energy goal of supplying clean power to 320,000 local families and reducing carbon emissions by 1.6 million tons annually.