The plant, owned by Cerro Dominador, a company of EIG Global Energy Partners, will have a capacity of 110 MW and will be the first of its kind built in Latin America.

Once operational, the solarthermal plant will prevent the emission of 640,000 tons of CO2.

Abengoa and Acciona received Notice to Proceed (NtP) to build this tower plant that is part of the Cerro Dominador solar complex. 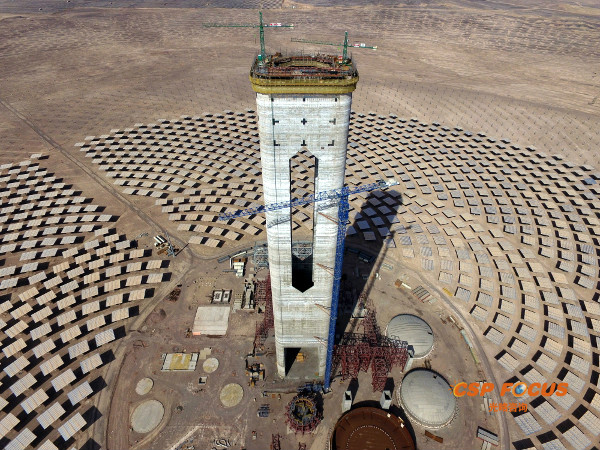 Picture: Image of the construction of the solarthermal plant of Cerro Dominador.

July 11th, 2018 –  Abengoa (MCE: ABG/P:SM), the international company that applies innovative technology solutions for sustainability in the infrastructures, energy and water sectors, and Acciona, through a consortium formed for this purpose, have signed the contract to complete the construction of the Cerro Dominador solarthermal plant in Chile. The consortium, led by Acciona Industrial with a 51% stake, will be responsible for building, with Abengoa technology, the 110 MW solarthermal plant, which will be the first of its kind in Latin America.

The solarthermal tower plant will join the 100 MW photovoltaic plant built by Abengoa and which has been in commercial operation since February 2018. Both will form a renewable energy complex with a total capacity of 210 MW and the first to combine both technologies in the whole continent.

This project will generate clean and dispatachable energy for 24 hours a day thanks to its thermal storage system with molten salts of 17.5 hours. The solar field, of 146 hectares, has 10,600 heliostats that will concentrate solar radiation onto a receiver located at 252 meters high.

Works are expected to be reactivated this month, once Cerro Dominador, a company owned by funds managed by EIG Global Energy Partners, closed the financing of the project last May with a consortium of national and international banks, and once obtained the Notice to Proceed by the consortium formed by Abengoa and Acciona.

Cerro Dominador complex is located in the commune of María Elena, in the Atacama Desert, in the Antofagasta Region, an area with one of the highest solar radiation rates in the world. The solarthermal plant that Abengoa and Acciona will build will produce clean energy that will prevent the emission of 640,000 tons of CO2 per year. In total, the complex will avoid 870,000 tons of carbon dioxide emissions into the atmosphere every year and will deliver clean energy through 15-year energy purchase agreements with distribution companies, signed in 2014.

The construction of the solarthermal plant of Cerro Dominador will have an important impact on local development, with the creation of more than 1,000 jobs in the area during its construction peak, and that will be priority for the neighbors of the communes of the region.

Cerro Dominador selected the consortium formed by Abengoa and Acciona Industrial for its proven experience in the development and execution of solarthermal projects around the world.

Abengoa will act as the technological partner of the engineering and construction project contributing all its know-how in construction of solarthermal plants, with an experience of more than 30 years having developed and built plants with an installed power of 2.6 GW worldwide, which currently represents the 38% of the installed capacity worldwide. Currently, it is the technology partner and participates in the construction of phase IV of the largest solar complex in the world in Dubai, the Mohammed bin Rashid Al Maktoum Solar Park, owned by Dubai Electricity and Water Authority (DEWA).

Acciona has built 10 solarthermal plants worldwide with a total capacity of 624 MW and is currently working on the construction of Kathu plant (100 MW) in South Africa. Cerro Dominador is the fifth solar thermal plant that the company builds outside of Spain. Its construction stands out for Acciona’s commitment to the development of renewable energy throughout the world.

Picture:Detail of the heliostats of the solarthermal plant.

Acciona is a leader in providing sustainable solutions for infrastructure and renewable energy projects across the world. It spans the entire value chain from design and construction through to operation and maintenance. With a presence in more than 40 countries and sales of €7.254 billion in 2017, the company is committed to contributing to the economic and social development of the communities in which it operates. Acciona seeks to lead the transition towards a low carbon economy, delivering quality and using innovative processes to optimise resource use and protect the environment in all of its projects.

Acciona has been present in Chile since 1993. Through its Infrastructure division, it has carried out major construction projects for highways, hospitals, hydroelectric plants and infrastructures for the mining sector. In the services sector, it provides handling services at Chile's leading airports, along with comprehensive freight transport through its forwarding business. Acciona has also designed, built and currently operates a large desalination plant for the mining industry in Copiapó, an initiative that joins the wastewater treatment facilities built in Valdivia, Osorno, La Ligua and Temuco.

Meanwhile, Acciona Energy is one of the leading renewable energies operators in the country, where it has built and operates the largest photovoltaic plant in Latin America, Romero, with a maximum power of 246 MW, and a wind farm, Punta Palmeras, with 45 MW, located in the Coquimbo region. The company is currently building the 183 MW San Gabriel wind farm in the Region of La Araucanía.