The Masdar project is one of the world’s largest operational concentrated solar power plants. Sanad Powertech, a wholly owned subsidiary of Mubadala Investment Company (Mubadala) and the energy and industrial MRO service provider, has been awarded a contract for the MRO operations of the steam engine and power generator of Shams Power Company, one of the largest operational concentrated solar power plants in the world.

The contract was signed during the Abu Dhabi Sustainability Week, held from the 11th to 18th of January 2020.

The project within the domestic portfolio of Abu Dhabi Future Energy Company (Masdar), a wholly owned subsidiary of Mubadala, and global leader in renewable energy and sustainable urban development, covers 2.5km2 and has a capacity of 100 megawatts. Equipped with a matrix of 768 parabolic trough collectors, the solar field generates clean, renewable electricity from solar heat rather than light. Through a system of parabolic mirrors which serve as solar thermal collectors, electricity is generated using conventional steam-powered turbines. 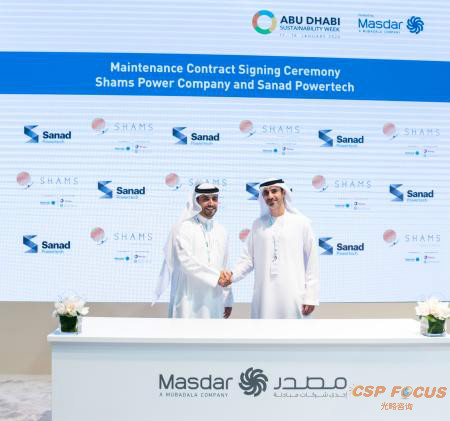 Khaled Al Qubaisi, CEO, Aerospace, Renewables & Information Communications Technology (ICT), Mubadala, said: “This collaboration between two leading companies in power and clean energy is a major step in our efforts to maximize joint business opportunities among all Mubadala companies. Sanad Powertech’s ability to provide competitive and high-quality services to an important future sector, such as clean energy, is a key advantage of this new contract.”

Mansoor Janahi, CEO, Sanad Powertech, said: “The award of the new service contract is further evidence of Sanad Powertech’s technical excellence that enables it to continually expand its scope of work. Having successfully delivered high-level services to the local energy sector over the past 18 years, the new contract will provide a strong opportunity for Sanad Powertech to enter the clean energy sector, one of the most important sectors of future growth, through partnership with Masdar, a key player in the renewable energy industry on local and global levels.”

Majed Al Awadi, General Manager of Shams Power Company, said: “The clean energy sector has been witnessing excellent growth in previous years, which represents a unique trend in the UAE, the region and the world. We are proud that Shams Power Company was among the first renewable energy power stations to be launched in the UAE. Since then, Shams has been providing electric power to various areas in Abu Dhabi, which is in line with Abu Dhabi’s energy diversification plan towards renewable sources of energy. Our contract with Sanad will have positive effects on the quality performance of the solar power station given the company’s long experience and advanced human expertise in maintenance.”

Shams Power Company is a key contributor toward achieving Abu Dhabi’s objective of generating seven per cent of the emirate’s required energy from renewable resources by 2020, and the UAE target of generating 27 per cent its electricity from clean energy sources by 2021 and 50 per cent by 2050. The plant is also supporting the UAE’s efforts to diversify its energy mix and reduce the country’s carbon footprint. The plant displaces about 175,000 tonnes of carbon dioxide per year, which is equivalent to planting 1.5 million trees or removing 15,000 cars from Abu Dhabi’s roads.

Sanad Powertech provides its services and solutions to a wide range of industrial gas engines and equipment used in oil and gas and energy industries. Moreover, it is considered the first independent MRO service provider, offering its capabilities to support a variety of Siemens Trent 60WLE turbines, making it the second global provider of MRO services to such turbines. The company also collaborates with major oil and gas companies such as ADNOC, Dolphin and global turbine makers such as Siemens.

With a customer-driven culture derived from its brand name, which means support in Arabic, Sanad Powertech directly addresses the need to implement a customised and flexible approach for every customer challenge.

Through a state-of-the-art turbine repair facility, supported by two on-site test beds, as well as advanced component repair and refurbishment facilities, Sanad Powertech has been the region’s MRO specialist for almost two decades.