The world is moving continuously towards using sources of energy that are more sustainable than the fossil fuels on which we predominantly rely today. Solar power is one of the most promising renewable energy technologies, especially in the UAE, allowing the generation of electricity from free, inexhaustible sunlight. But even though the sun shines every day, this resource is subject to supply fluctuations. Further, every night when the sun sets, as it inevitably does, the supply of solar energy ceases until the next morning.

Conventional batteries based on electrochemical storage can charge from solar energy during the day and provide power for a few hours at night, but their economical discharge duration is limited and they are made of critical materials that are not available in infinite supply.

However, a team from Khalifa University, in collaboration with Swedish solar energy company Azelio, and Masdar (Abu Dhabi Future Energy Company), has drawn inspiration from this need for energy storage innovation and applied it to a natural process: the phase change of materials.

During the day when there is a lot of sun, solar energy is used to produce cheap electricity (photovoltaic panels) or provide some combination of heat and electricity (concentrated solar power (CSP). This sustainable energy can be used to melt a Phase Change Material or PCM. When temperatures drop off, those materials cool and re-solidify, releasing their latent heat in the process. A stirling engine can then convert this heat back to electricity on demand. The team aims to leverage this phase transition process using an alloy of aluminum to provide thermal powered electricity at night, after the sun goes down.

“This is the first demonstration of the Azelio technology and we’re looking at proving the long term viability of the system. We need to guarantee that it will last at least 25 years and that’s what we’re expecting. So we will evaluate the TESpod™ System during a full year of operation, collecting data and checking performances. We’re very excited about this installation as it uses recycled aluminium alloy and will be a game-changer in renewable energy,” said Dr. Nicolas Calvet, Assistant Professor of Mechanical Engineering at KU.

Dr. Calvet and his team have placed an aluminium alloy at the center of the Azelio’s energy storage system at the Masdar Institute Solar Platform (MISP), the UAE’s first solar platform dedicated to research and development of CSP and thermal energy storage (TES) technologies. 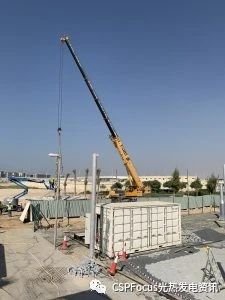 This is how the Azelio TES technology works: Photovoltaic panels generate cheap electricity during the day. This electricity is used to melt the PCM using an electrical resistance heater. This same concept is possible using wind energy or excess grid electricity as well. Another configuration can use direct heat from CSP by leveraging generated heat to melt the aluminium alloy. When electricity is needed, the alloy is allowed to cool and resolidify, releasing heat that is then used to generate electricity.

“The Azelio Stirling engine is converting about 29 percent of the latent heat stored in aluminium alloy to make electricity, making Azelio’s TESPod™ system very cost competitive when charged with inexpensive solar energy,” explained Dr. Calvet. “This will allow us to produce 50 kW of electricity 24/7, meaning the MISP can generate its own energy during the day and during the night become energy independent.

The MISP was inaugurated in 2015 in recognition of the increasingly important role CSP and TES will play in achieving the UAE’s renewable energy target of generating 44 percent of its energy mix from renewable sources by 2050. With its one-of-a-kind 100kW beam-down solar concentrator facility among other, the MISP aims to provide local and international research institutes and solar and energy storage companies the opportunity to research, test and validate new CSP & TES components and systems, increasing efficiency, driving and driving down the costs of technologies that can withstand the UAE’s harsh desert climate.